Part of the joy of horror movies, specifically writing about horror movies, involves the opportunity to entertain everything from the terrifying to the disgusting. Between those two extremes also lies the absurd. The 1980 Italian cannibal slasher Anthropophagus firmly places itself in the category of the absurd.

Directed by Joe D’Amato, Anthropophagus (1980) covers the razor thin plot of a vacation voyage to remote Greek Isles. Upon arrival, the crew encounters a desolate island, formerly inhabited with local citizens. Also, a raving lunatic that craves the taste of human flesh hides on the island. Tisa Farrow makes another appearance as the lead lady for another ridiculous Italian flesh-eating romp. This time, there is no voodoo magic, or biological agent responsible, just a hungry cannibals with a few loose marbles.

We recently uncovered this film while researching Italian mondo cannibal films. As the story goes, Anthropophagus advanced the game with respect to repulsive gore and violence. This bold claim demanded an objective review.

One of the first things that stands out about this film is that nothing really stands out. It begins with an idyllic day at the beach violently interrupted by an unseen cleaver wielding maniac. From there, Julie (Tisa Farrow) finds a ride to a remote island with a band of strangers for a weekend trip. At this point, it seems that Tisa Farrow would never get on another boat to a remote island, but she’s nothing if not determined. The rest of the crew involves an appearance of Italian scream queen Zora Kerova. Finally, in a detail that proves critical later in the film, one of the adventurers is pregnant.

From there, the film plods along at a snails pace for nearly 75 minutes. The crew bounces around both mindlessly and incompetently around the island. Apart from a few mummified corpses, they are unable to find any living people on the island. On the boat, an unseen attacker kill the boat captain and kidnaps Maggie, the pregnant woman. Unmanned, the escape boat drifts out into the bay. The setup couldn’t be more Italian and less plausible.

Anthropophagus pleasantly surprised with the unusual Greek backdrop. We are not aware of much horror set in this county. If any come to mind, make sure to let us know in the comments.

The Anatomy of an Anthropophage

Those with a keen eye for Latin understand that the title of the film refers to an organism that eats humans. Indeed. In this film, that organism is a man named Klaus Wortman. Besieged by circumstances outside of his control, Klaus did what any other man would do. He developed a taste for human flesh that drove him into insanity. Single handedly, Klaus overtakes the idyllic Greek isle. He lies in wait for his next victims to arrive. All in all, it appears an incredible task for a man of average status and unimpressive strength. Everything, including his receding hairline says low testosterone.

Considering the relative youth of the stranded party, and the tepid threat by the villain, Anthropophagus fails to create any legitimate threat that would make this film interesting from a suspense perspective.

An “Escalation of Gore”

In his book “Lethal repetition: Serial Killing European Cinema”, Richard Dyer states that Anthropophagus holds “a noted place in the annals of the escalation of gore”. Malevolent Dark would love to agree with that stance, but it couldn’t be farther from the truth. Long before this, visceral and disturbing gore had already become common place in Italian cinema. Off the cuff, Lucio Fulci’s famous eyeball scene in Zombie (1979) far surpasses anything in this film. Additionally, the effects are not especially well done by any measure.

The often quoted money-shot of this film involves Klaus rending an unborn fetus from the still warm womb of a recent victim. He proceeds to devour the baby. It sounds much worse that it is really. The baby is pulled from the womb off-camera and the baby looks like a bungle of grapefruit in a pink sack. This scene was enough to earn the film the now coveted Video Nasty award, but likely more for the idea than the actual graphic content. Furthermore, the actually Anthropophagy of the fetus (coining that rhyme) last nary a few seconds before ending.

The only other notable kill come at the finale. Klaus has his abdomen split open like a Christmas turkey. As his gut spill he simply unable to resist taking a bite of himself before dying. In standard Italian form, these innards appear to be real animal guts. It sounds much worse than it actually is on-screen, but at least it adds a bit of self-referential humor to close an otherwise dull film. 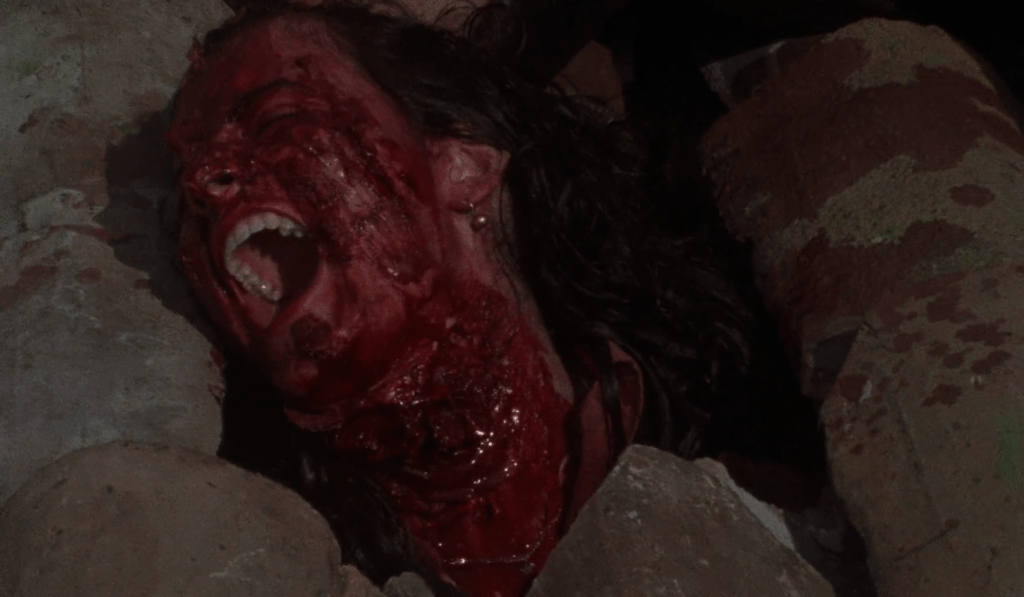 Many Italian horror films suffer from painfully low budgets in the 70’s and 80’s. Despite their lack of resources, these films have always struck me as wonderfully adept. At least some aspect of horror filmmaking stands out among others. Sometimes it’s the cinematography. Other times it’s the soundtrack. Often the special effects deserve recognition. This film doesn’t really excel at anything other than boredom. The soundtrack drones with forgettable 80’s synth lines. The story wants for anything remotely compelling. Anthropophagus really doesn’t shine anywhere.

Supposedly, director Joe D’Amato said that Anthropophagus is “perhaps the lowest costing movie of my film career.” Malevolent Dark think is it at least must be in the top-3. Knowing his resume, this statement is incredible.

Malevolent Dark felt a duty to checking this film out after bold claims of being an “escalation in gore”. We consider this to be a vast overstatement. Other sources called it a cult classic, but we are unsure what that really means. Possibly it’s a decent bad movie for people that like bad movies, but if Anthropophagus is a cult classic, then the words cult classic have no meaning. However, those that can’t stop digging in the crates for obscure horror may find something of value here. We don’t regret watching it, we just didn’t think it was good.

Session 10 is a fortnightly podcast where two irregular guys talk about regular horror movies. British horror writer Craig Wallwork, and purveyor of all things strange, Boff Island, walk you through horror movies from each decade. Expect chills, thrills, spoilers, and hilarity.
Click Above!

There's a new, never-before-seen terror in the skies... Thanks to a greedy man unearthing forbidden technology from the past, spectral creatures from another world have crossed over to ours.

Flight of the Phantasmadactyls is the fourth installment in Matt Schorr's terrifying Zombiesaurus Series, which has haunted the dreams of young readers for almost a decade.
Frank McConnelly is a loving father and husband, a brilliant business man, and a secret doomsday prepper. During a party at his Vegas mansion, The President gives an address warning people to stay inside due to a strange weather pattern that is cutting off communications across the globe. The power goes out as the fog rolls in. In the ensuing chaos Frank escorts people down to safety of his bunker. But, In the thick fog something is stirring. Something that hungers. Will the bunker protect them or will they be the next meal?
Click Above!

Inside the depraved mind of Malevolent Dave takes the reader into the world of quick hits and hot takes in bite size chunks.
Share this ArticleLike this article? Email it to a friend!
Email sent!