Recently, Malevolent Dark reviewed the Joe D’Amato’s supposed gore fest, Anthropophagus (1980). To be honest, that film left much to be desired. The claims of unrestrained gore were found to be exaggerated at best. Even the its infamous sequence of baby eating, fails at it’s intended purpose. Supposedly, Anthropophagus “upped” the ante with respect to gore in film; however, we left that film woefully disappointed. The truth of the matter is that by 1980, nearly act of gore-laden violence had already hit the silver screen, and Joe D’Amato had already bested Anthropophagus with previous work. 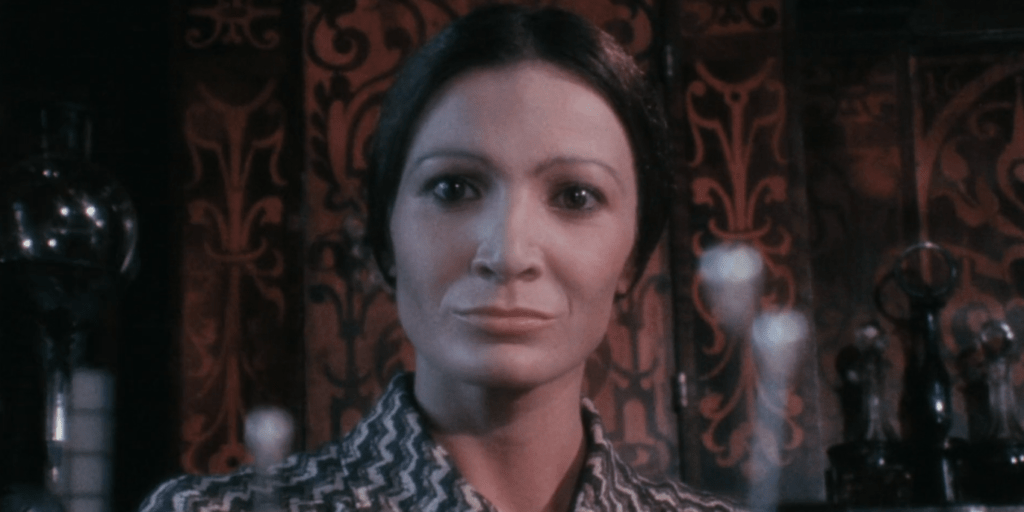 What we found on our next sampling of Joe D’Amato’s work is a little film called Beyond the Darkness. As with many Italian horror films of this era, it received several releases. A few involved the Italian trick of trying to associate as an official sequel to an American horror film. Notably it was framed as a sequel of both the Evil Dead franchise and the House franchise. Also, it received a release as Buried Alive (1985) in the United States. In usual form, Buried Alive received that all too typical editorial chop before release. While I don’t agree with aggressive copyright law, but we can’t have Joe D’Amato making sequels to Evil Dead…. right?

As with most Italian films of the era, the plot wants for some complexity. Supposedly, Beyond the Darkness presents a remake of a 1966 film called The Third Eye. The underlying theme concerns the loss of a loved one and one’s inability to let them go. However, D’Amato takes this concept to ridiculous extremes. The film begins with Anna Völkl, the terminally-ill fiancé of Frank Wyler. Frank, a taxidermist, descends into madness upon the death of his wife. Immediately he develops a twisted relationship with his housekeeper, Iris. Immediately after the death of Anna, Frank regresses to an infantile state, breast feeding from Iris for comfort.

You read that right.

Being a man of very particular skills, Frank sneaks around the funeral parlor to inject Anna with preservatives. Frank intends to dig up her body so that he can be with her forever. Frank retrieves Anna’s body and transports her to the house. In a rash of poor decision making, Frank also picks up a hitchhiker while transporting Anna in the back of the truck. Taking them both home, Frank’s real work begins. He must finish the preservation process in his workshop.

Joe D’Amato dive right in with the gore with Anna’s preservation scene. In traditional Italian style, D’Amato uses real animal guts to nail the effects. The results are astounding. As Frank disembowels the love of his life, an undercurrent of black humor creeps in as he absent mindedly starts chucking Anna’s guts into a bucket. Out come the intestines, then the liver and the pancreas. Finally, he plucks Anna’s heart from her chest. In a fantastic stylistic touch, Frank take a bite of her heart as blood spurts from the Aorta. The results are totally convincing and wholly effective.

Still at the house, the hitchhiker from earlier happens upon Frank’s basement of horrors as he exchanges Anna’s real eyes for glass. A struggle ensures. Again in convincing fashion, Frank wrestles the hitchhiker to the floor and rips her fingernails out with a pair of pliers before strangling her to death. The exchange terrifies while evoking winces and cringes. The scene is truly barbaric. Iris makes an appearance at the door showing her approval.

Pretty much immediately, the gore fest keeps trucking with the disembowelment and dismemberment of the hitchhiker. Again, Joe D’Amato and team do a tremendous job of convincing the audience. Chop after chop, and limb after limb, the body parts are tossed in a bathtub. Frank pours giant casks of acid over the body parts, liquifying them. Wrapped in baskets, the giant bottles of acid look like bottles of Italy’s finest Chianti. Finally, Iris shovels the last meaty bits into a bucket. Iris dumps the human sludge into a hole in the woods as if she is emptying a mop bucket.

Later, Iris makes a meal that looks suspiciously like the scraps she shoveled off of the floor. They never out-right claim that these are the remains of the hitchhiker, but the disgusting close-up shots of their maws grinding the shredded meat to a bloody pulp leave no doubt to the meal’s human origin.

Clearly a Better Movie on Many Levels

Joe D’Amato does everything better in this film. First of all, Italian horror favorite, Goblin, produces the music for the film. Nobody will confuse this soundtrack with their best work, but the music far outshines the music in Anthropophagus. Furthermore, the music does a much better job controlling the mood and punctuating key moments of the film. Joe’s cinematography also shows much more care and professionalism as he trucks the camera through Franks home. The acting, while not great, suffices. Kieran Canter as Frank Wyler toes the line between sympathetic and disgusting. Franca Stoppi looks the part of Iris, the jealous mother figure with a stern look and a weathered jaw.

Certainly the story could have benefited from more character development, but Beyond the Darkness pulls off enough stunts to keep the audience interested.

We must say, Malevolent Dark came away from this film pleasantly surprised. It reeks of low-budget spaghetti horror, but somehow cobbles together some very compelling cinema. D’Amato paces the film very well. The action starts quickly and continues with evenly paced intervals. As adequately stated, the gore excels both in visuals and concept. Beyond the Darkness holds some really revolting ideas and scenes. If the gore isn’t enough, Frank’s psycho relationship with both Iris and the corpse of his fiancé add to the depravity of the film.

The bottom lines is that Beyond the Darkness is a quality film from a director notorious for low-budget splatter. The underlying theme of failure to deal with loss provides a strong substrate for an otherwise weak plot. Coupled with buckets of animal innards and an appetite for human flesh, the result is a modern take on H.G. Lewis style horror. And that my friends is a wonderful thing!